Steph is the founder here at Don’t Buy Her Flowers, and gives an honest account of family life with three children, her husband Doug and running a business over on her Instagram. Here for our #whatmakesadad series she writes about how increasingly Doug’s role as a Dad allows her to be a person beyond being a Mum.

The role of a Dad is so much more varied than it might have been when we were kids.

There’s also so much more variety depending on your own set up. I have friends resigned to their ex-partners contributing £50 a week, and others whose husbands have taken on the role of primary carer while they smash it at work. For me (and it’s only occurred to me recently), part of what I admire in Doug is when he steps up as a Dad to allow me more space as a person, not just as a mum.

That might be better sharing the labour of all the things going on in the home – doing the weekly shop, taking on booking kids clubs, making the vets appointments – or it might be the big things, like supporting me in starting a business.

And sometimes, because it feels hard to be a woman and work and kids and guilt, I don’t thank him for it because I feel it’s right that he should do all those things. Where previous generations might have praised a Dad for changing nappies or getting up in the night, my minimum expectation was that Doug would do those things. But I know what it feels like to not feel any gratitude and it sucks, so I’m a massive hypocrite.

By no means have we got this down. He makes mistakes. We’re still learning. I’ve made plenty, but I haven’t had a tired snipey me watching me make them and giving commentary when she’s tired about how shit I am. Yeah, I do that.

It’s not all hearts and flowers…

But the kids see that Doug is willing. So in celebration of Doug and as public recognition that he is in fact a pretty awesome Dad, let me tell you some things.

Doug is a bit like Clark Griswold in the National Lampoon films. When he gets an idea in his head, you cannot sway him. Even when it no longer makes sense anymore, if he’s said he’ll do something, he will do it. If that means mowing the lawn with a taxi, three kids and an irate wife sitting waiting to leave for the airport for their holiday, if he’s said he’ll mow the lawn before we go, we cannot leave until he has mowed the damn lawn. He doesn’t do anything half arsed.

Doug is in charge of all hospital appointments and A&E visits with the kids. He regularly splits his trousers (my favourite being the time he demonstrated how to lift a box in a health and safety briefing on his first day in a new job and committed to an enthusiastic bend from the knee lift, splitting his suit trousers from front to back with an almighty rip). He has taken the role of PE teacher seriously throughout lockdown, creating a chart to record their progress in training. He has them car-singing ‘It’s not for me’ about Slash’s relationship with heroin. He comes back from work trips with a pencil from The Museum of Civil and Human Rights (they were disappointed, reader) and has burned the fear of god in to them when it comes to road safety (‘I cannot protect you from vehicles. You may die if a car hits you’). 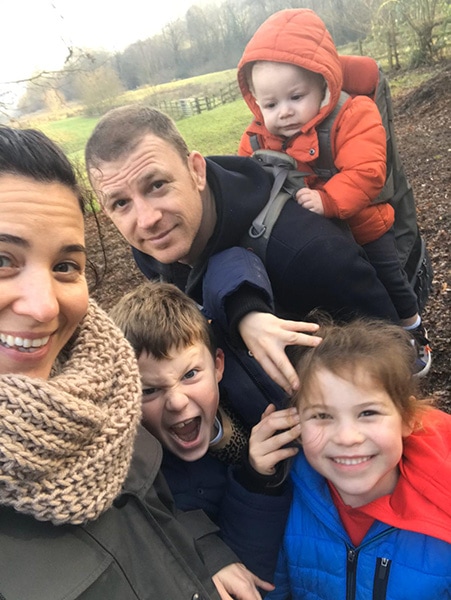 There are twenty-one months between her and Buster so it was pretty full on (read: I was very ragey and overwhelmed and we rowed a lot). Doug was taking Buster swimming to get him out of the house and leave us to rest. After a frantic scramble in the sweaty, grubby changing rooms to get Buster in to his armbands and swimming gear, Doug realised he’d forgotten his swimming shorts. He could not come home to me – I’d probably gone on about the importance of packing the bag correctly and he probably feared for his life.

He went to reception and said he’d lost his swimming shorts. The guy heaved out a Lost Property box and asked ‘What do they look like?’. ‘Er, kind of black-y, bluey…grey-y….?’ Doug said. ‘Righto – is this them?’ reception man asked, holding up a pair of blue budgie smugglers. ‘Yes!’ he exclaimed confidently, gratefully taking the tiny, fetid, damp speedos. While Doug struggled in to them, Buster managed to get his head stuck under the cubicle door, while yelling ‘Get off me Daddy’, so when Doug emerged from the changing room wearing SOMEONE ELSE’S too-small, mouldy swimming trunks, they’d gathered quite a crowd.

When they returned home Doug was triumphant while telling me what had happened. The TV series 24 was big at the time; ‘I was like Jack fucking Bauer’. If Jack Bauer had forgotten to pack his swimming shorts and hoodwinked some out of lost property.

Had I forgotten my swimming costume, I would have miserably packed everything away and returned home full of annoyance at myself, guilt at letting my kid down, probably raging at Doug for it somehow being his fault.

I like a plan, he likes to wing it. Don’t tell him, but I kind of like it. We’re not the same, we definitely both bring something different to the parenting table. And as the kids get older, they’re learning who we are – Steph and Doug, not just Mum and Dad – and terrifyingly they’re learning from who we are.

If you’d asked me What Makes a Dad before I had children, or even a few years in to having them, my answer would be quite different to now. Doug’s would probably be too. We’re learning all the time, as our kids’ needs change and our own needs change. But in more recent years, Doug’s support of me as a person and not just a mum has become one of the things that most makes him a Dad, and something I want my kids to see.

*WIN* £75 worth of credit to spend with Don’t Buy Her Flowers.

Because we know there is no such thing as a ‘typical dad’, we want to hear your stories about your dad or a father-figure and we have three vouchers of £75 to giveaway. Winners will be chosen at random. UK Deliveries only.

To enter the giveaway, what you have to do is:
1. Post to your *own account* on instagram with the #whatmakesadad. It can be light-hearted or serious, an image or a video – the choice is yours.
2. Include the following sentence in your caption ‘I am posting my #whatmakesadad to enter a @dontbuyherflowers giveaway’
(if your account is private just DM us and we will request to follow you so that we can see your entry). Competition closes midnight Monday 15th June. Find out more on our Instagram.