Where’s My Happy Ending? We speak to Anna and Matt about their new book

Valentine’s Day is just round the corner and it’s likely for some of us (most of us) it is not all romance, candlelit dinners and looking lovingly into each others eyes. In fact it could be quite the opposite.

In writing their book, journalists Anna Whitehouse and Matt Farquharson (AKA Mother and Papa Pukka) spoke separately with many people, from an 80-year-old sex blogger to monks to professional relationship experts, and then came together to assess what they’d found out. They write refreshingly honestly about relationships for those who have met someone, settled down, and then might be wondering ‘is this it?’.

We asked Anna and Matt some questions relating to their new book – Where’s My Happy Ending?

So… what did you find out in writing the book? Where IS your happy ending?

Matt: I liked something I learned from staying in a commune in rural Portugal. They had some odd ideas and some clever ones, but the bit that stuck came from a 54 year old free-loving physicist who said, when you get angry, don’t ask ‘what do I want?’ but stop and ask, ‘what does love need now?’. It sounds as cheesy as over-ripe brie, but it’s about pausing to think a little more kindly instead of being a dick about how the dishwasher has been stacked.

What impact has it had on your relationship?

Anna: It probably made it worse for a bit. There were lots of tears and I wouldn’t recommend writing a book like this with your partner. But ultimately it’s made it better.

What advice would you like to go back and give Wedding Day Anna and Matt?

Matt: Skip the pictures and get to the bar sooner.

And what would you say to anyone who feels like they love their partner, but they don’t seem to get on particularly well at the moment?

Anna: I spoke to an 80-year old sex blogger who gave some great advice (including how to use a garden stool to get into position), but one thing really clicked. She said that in the hard parts, particularly with kids around, ‘you’ve got to cling on my lovelies because it’s wonderful on the other side’.

Matt: One therapist told me that people overlook that love needs work. It’s easy to forget that and assume it will find a way. It won’t, unless you help it. 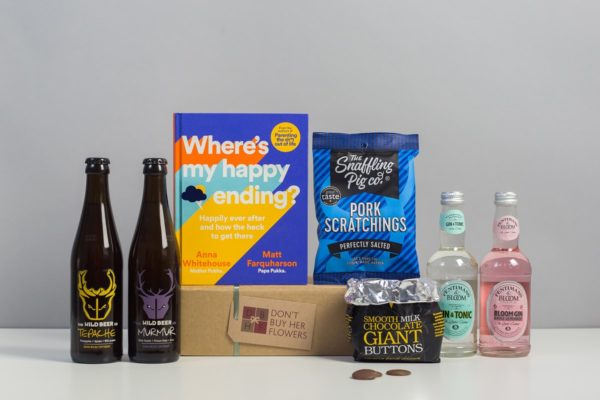 We are delighted to have Where’s My Happy Ending? as an option in our Book, Create a Gift, Unwind, Stand Up To Cancer and Create a Man Packages, as well as a Pukka selection (pictured) put together by Matt and Anna themselves.