To celebrate the launch of The Sleep Package, Steph has written some thoughts on sleep (or lack of!)

Having children made me obsessed with sleep. As the saying goes, you don’t know what you’ve got ‘til it’s gone.

I miss sleep. I miss going to bed, closing my eyes, and waking up in the morning feeling fresher than when I went to bed, ready to take on the day. I miss waking up naturally and looking at the clock with a ‘ooh, that time already?’. I didn’t used to think about sleep, it was just something I did. Every morning, the first thing I do is count how many hours sleep I’ve had. I don’t really know why, it won’t make a difference to how I feel, but I live in hope of getting the magical eight hours. That first look in the bathroom mirror of a morning confirms that my face gives away exactly how tired I am. My eyes seem to take half the day to open properly. I feel like a newborn puppy but without the cute.

When the kids were small, it was inevitable that every night would consist of broken sleep. Night feeds, when they were potty training, someone lost a cuddly toy down the side of the bed, someone wanted a cuddle. The ongoing gro clock saga which helped initially but then became a hindrance as they worked out how to make the sun come up at 4.05am and when the logic has been explained that once the sun is up it’s MORNING, those are the rules dammit. And then another bastard tooth would come through or a bug would hit. It was brutal. Just remember the words said to each other between 11pm and 6am don’t count, ok? 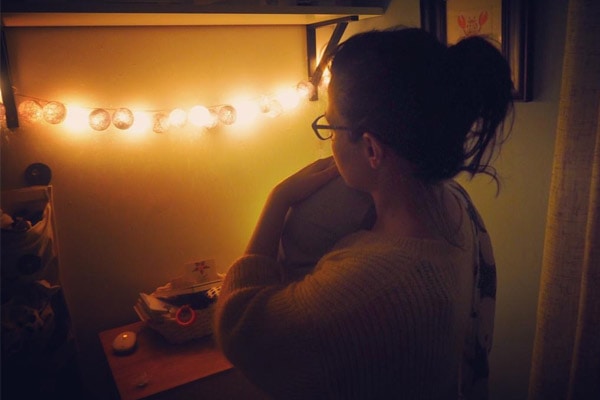 But now, they’re older. At nine, seven and two, most nights everyone sleeps through. And yet I’m still tired. And I think the problem is actually me.

We recently went to a cottage for a few days in half term and, with social media off my phone and minimal interaction with work, I slept. I didn’t watch TV in four days except whatever tripe the kids had on, went to bed when the kids did and read my book before bed. And I slept. I took naps on two days despite the fact I’d slept all night. The night we got home I was back to my old ways,  and I lay in bed at 3am mourning the glorious sleep I’d had. My mind whirred through a list of overwhelm that had been there when I went to bed and would be there in the morning but at 3am was taunting me to run through it, to dictate in my head emails I needed to write, social media posts I’d thought of, replies to WhatsApp messages I needed to send. And it makes me sad because it’s such a waste – just an overactive whirring that achieves nothing except deepening the sagging around my face and adds a bitterness to my furrowed, grumpy brow.

Every night something kicks in at 9pm. All day I’ve vowed I’ll go to bed at 9pm so that tomorrow I don’t feel so knackered – I feel excited about the prospect of that early night and wish the day away. And then there seems to be an endless set of distractions. I remember that I wanted to pluck my monobrow before tomorrow’s meeting. At bedtime I promised a kid I’d iron some aquabeads for the morning. The washing has sat in the machine for 24 hours and if I don’t hang it out now it’s going to have to go on again and I’m already not doing enough to help the environment. I endlessly scroll on my phone, flicking from Instagram to Facebook to a news site to Twitter and then 30 minutes has passed so I reload because they’ll all have been updated and I start again. Guilt follows as I finally make my way to bed, those extra hours of potential sleep lost for another night. Sigh.

Sure, life is busy, but most nights I’m at home and so I am actually responsible for being this tired. I could be in bed earlier. I could switch off my phone from 7pm to allow my brain to switch off before bed. I could drink the relaxing tea and have the relaxing bath and read the relaxing book. Whenever I’ve done these things, I sleep and life is better. Everyone keeps wanging on about self-care yet most of us seem to be on self-sabotage with one eye glued to a box set and the other to a phone.

Hearing about someone else’s lack of sleep really is boring (sorry ‘bout that). I’ve been kidding myself that if I could just get a good week of sleep I’ll be back to looking as I did ten years ago, but I’m pretty sure this is my face now. So, with renewed vigour, I’m going to try again. It’s not rocket science, it’s acknowledging that once you get to a certain age, and life gets busy, sleep requires a bit of work. Tonight I will do better.

We created the Sleep Package because the team at DBHF spend a lot of time talking about sleep, wishing we had more sleep, telling each other how we didn’t sleep the night before, and not enough time actually sleeping. We can’t gift actual sleep, but we HAVE created a package so you can choose from a selection of products to create a gift package for someone that is all about encouraging sleep.

Illustration from the brilliant Common Wild