International Nurses Day: Steph talks to Debbie, a Critical Care Ward Manager about her experiences during the pandemic

Debbie Seal is one of the Ward Managers in Critical Care at Gloucestershire NHS Foundation Trust covering Gloucester and Cheltenham Critical Care units. She’s married to Matt and has two girls, Evie (14) and Hattie (12).

Debbie is also one of my oldest friends and was on a path to be a nurse for as long as I can remember – she was the only one of us who left school knowing exactly what she wanted to do.

I learned some things having this ‘work’ chat with her and I’m even prouder and think she’s even more brilliant. Just don’t expect her to remember anyone’s birthday and for god’s sake don’t let her near a chair when she’s had a drink.

I’ve lost all sense of time; it was only when people were talking about this year’s Cheltenham Races again I realised it’s been a whole year, as they were just before the first lockdown in March 2020. Sometimes it feels longer and sometimes like it’s flown by. My husband was in Critical Care in February last year following surgery, so we were in a bit of a bubble before it hit, and then a month later the whole unit looked like I’d never seen it before. I remember standing in the same spot thinking ‘I can’t believe this is the same place’ with one of the nurses’ from the ward ventilated and another colleague’s dad in the next bed, both in the same side room where Matt had been recovering a month earlier. We had made one bedspace accommodate two patients to fit more people in.  I could hear my breath in the panic – you know when it feels like you can hear inside your body? I had to stop and think ‘this is actually happening’. It was a very unreal feeling and something I never thought I’d see.

You have some really bad, traumatic days in Critical Care, seeing a lot of very sick people, lots of emergency planning and major incident planning, but never did I think I’d see so many patients in our ward and the respiratory ward. So so many. It’s a massive blur. I can’t remember the bit between the two surges either. The first surge felt snappy – so intense but snappy – and the second was long and felt unending and we’re only just out of it now.

What was the toughest thing about it?

As part of my role I would go to the ward with the consultant and look at the respiratory patients to see who needed to go down to Critical Care for extra support. I always felt like they dreaded seeing us, you could see it in their eyes. At one point my uncle was on the respiratory ward and seeing his face watching me come in was awful.

What was really weird is that some people hardly looked that bad with Covid when they came in – many could speak in sentences and you’d see them chatting on the phone to their family and then I’d come in the next day and they’d have taken a turn. There were lots of moments where I carried their bags in with them, and then had to carry their bags out without them. That was always one of my worst moments.

The scale of it, especially in the first surge, meant there was less time for actual nursing, which for most of us is why we do the job. Usually we get to know patients, we know their relatives, put their pictures up and make their bedside nice. We had to be very task orientated, there was new information coming in all the time – it’s easy to forget how little anyone knew at the beginning – and really it was just about survival.

After the first surge the staff all sat down with psychologists and we found that the thing our nurses struggled with the most was not being able to identify with the patients, because it had been so intense and there weren’t relatives to get to know, just very poorly patients. So during the second surge we put pictures up and kept diaries again, which was also critical for patients to fill in the gaps. That helped and felt more like the caring side of nursing as we know it.

How have you felt you’ve coped?

I remember the first time I heard about the clap. I’d thought ‘what a load of crap, we’re doing our jobs’ and forgot about it, and then I heard something one night and opened the window and heard this clapping and banging and I started crying, it was so emotional. And when I heard it at hospital, when we were all together on shift, that was amazing. One night the AA vans all turned up doing a circle, and fire engines came blasting their horns. Our clinical lead consultant made badges saying ‘we’ve got this’ and then for the second surge ‘we’ve still got this’, and he’d share all the statistics with us about how well the hospital was performing and would keep us informed with videos as no one had the energy or time to read emails. Those things really motivated everyone and we needed that, we needed people like that.

Our team is amazing, like a family, and we support each other. We had some psychology group sessions and I thought I was ok and then had a bit of a breakdown in front of everyone! But it’s one of those things when you think ‘I just need to get on and do this’, you have to shelve it and think you’ll deal with it later as you can’t open it when you’re in it, not when there was so much to do and so many patients who needed us.

People were amazing and generous. I’ve never seen and eaten so many easter eggs and I blame them for us all piling on the pounds. We were in stretchy scrubs all the time (which the public made for us) and it was a shock when we recently put our uniforms back on – they don’t fit! 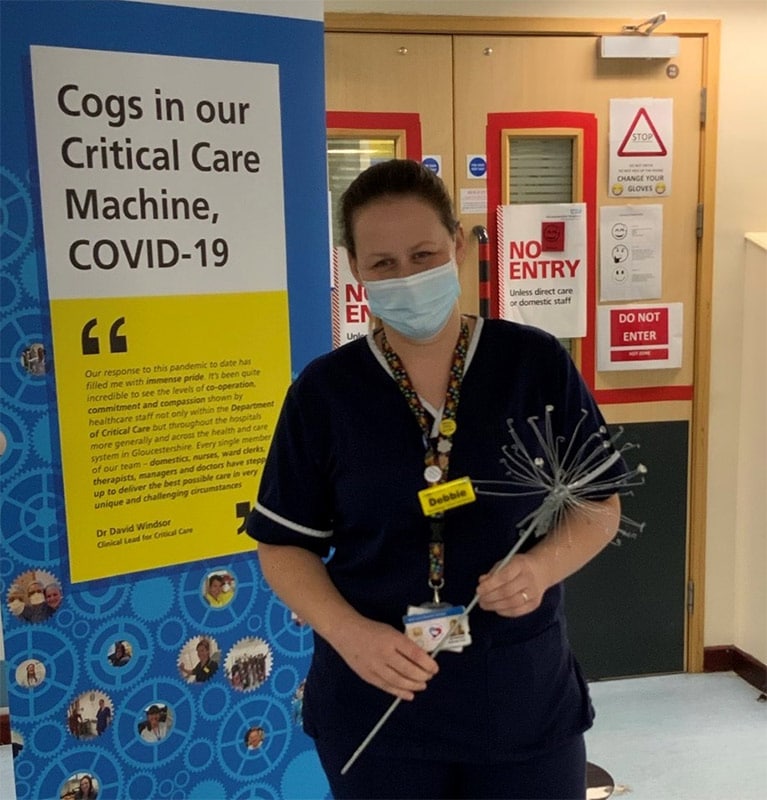 We’ve been running Covid survivor clinics – there are a lot of gaps where the patients can’t remember anything. This is a multi-disciplinary team clinic running every couple of weeks, patients come for a session and have a bit of an MOT, do a cognitive test, see psychologist, respiratory doctor, dietician, fill in what happened and it’s really a one stop clinic to sign post them as quite a few people have ongoing issues – physically or mentally – that need following up. Those are emotional for nurses in the clinic as it was such an intense time. When you come face to face with someone who you didn’t think would make it, it really hits home, what a big thing this was.

What are you most looking forward to doing when the next lot of restrictions are lifted?

It’s the little things we take for granted I’ve missed most – simple things like going and meeting your friends. And giving your mum a squeeze and having a cup of tea in her house. I really miss having a cuddle with my mum. Not hugging has become the norm, which is horrible.  Oh and my husband having his second vaccine and going to the hairdresser. Because of his kidney condition, he’s wanted to wait, but his hair is awful.

What do you think is the best way people can say thank you to a nurse?

Protect the NHS. I think it’s all we really want. And show kindness. Most people do, though when it’s misused or people abuse us, that can really cut. But it’s part of the job.

When this is all over, what do you hope people take from the Pandemic?

*Long pause…* I really want to say, appreciating the NHS. You always think it’s going to be there to pick up the pieces, and feel desperate that it’s always going to be there, and we as a team never ever would have got to the point where we wouldn’t have helped people. There couldn’t be one person we would turn away. There was so much planning that went in to making as much space and as many beds as possible, and when you look at other countries, the take-away should be how important the NHS is and how we need to protect it.

To mark International Nurses Day we have partnered with Nursem Skincare to create The Nurse Care Package , developed with input from nurses and care workers. To find out more visit our instagram.

Oh I loved this. Brilliant interview girls. Well done Debbie, so grateful for you and all of your colleagues ♥️