What to say (and not to say) when she’s expecting.

I’d forgotten how utterly stupid people could be when you’re pregnant, until I was expecting my third baby.

Everyone has an opinion or a story to tell, unsolicited advice to offer or just a throw away comment such as ‘I was big/small like you’ that they walk away from and you’re left reeling that you’re too big or too small and what should I do and I-can’t-look-after-my-baby-and-it’s-not-even-here-yet *wails*.

Then there are the people that get it right – the friend that turns up with food, knows when you need a hug, listens while you cry about any fears.

I had pretty straightforward pregnancies, and it was still hard in places. An emotional rollercoaster, an exhaustion that at times rendered me useless, anxiety about how we’d cope and more specifically how I’d cope. And I know plenty of people have other stresses on top of that during pregnancy, be they health worries or sickness, the mental strain of previous baby loss or something unrelated but really stressful going on at the same time.

We asked some women in the know to share the best and worst things people can say or do to a pregnant woman, and I wholeheartedly agree with all of them. Perhaps we could print these off and stick them up in offices and on public transport as a guide of pregnancy dos and don’ts for bystanders?

Let’s start with the worst offenders…

Don’t Provide Unsolicited Advice
Sandeep advises Do not give a pregnant woman any unsolicited advice. None whatsoever. If she wants advice she will ask for it. Qualify any advice you do give with the proviso “this worked for me / this was my experience…but you will find your own way and I’ll be here to help you should you need it”.
Anna adds to this, that it is unhelpful to devalue ‘the very valid feelings she is feeling. Such as ‘Oh you think you’re tired now, you just wait until the baby is here’.

Don’t Share Horror Stories
Siobhan writes that the worst thing would be to tell a pregnant woman a scary birth horror story. But typically when someone sees a woman with a bump this is what they feel compelled to do?!
Georgia adds After the congratulations all you seem to get is horror stories which don’t help your anxiety as a mum to be.

Don’t Comment on Bump Size
Annie was told multiple times each day, from around 20 weeks – with each pregnancy – how big I was. “Sure it’s not twins?” etc. These comments are not original, funny or helpful. When a woman is already acutely aware of her changing body, she needs positive comments or none at all. Telling a woman she’s huge will never make her feel good.
In case it’s not clear, Alice provides examples of the worst things people say (in no particular order):
• You look huge
• Blimey have you not had the baby yet?
• Do you think the doctors got the dates wrong?
And it’s not just about being told how big you are. Sandeep added Pregnancy is a minefield – it isn’t straightforward. A seemingly inane comment can trigger *so* much. In both of my pregnancies the girls stopped growing in the third trimester (IUGR) so any comment about the size of my bumps (and there were many) was deeply painful.
In summary, as Jen says Unless you’re about to say it’s absolutely perfect then don’t say anything at all. Looking ‘big’ or ‘small’ is something that can really stick with us when we’re trying to adjust to our changing body, adding an unnecessary layer of worry to what is already a pretty stressful and mind-boggling time.

So, what are the best things to do and say to a pregnant woman?

Do Tell Her She Is Beautiful
Nilly advises tell her You look beautiful! We get told we look bigger ALL the time. We’re so aware of this. We’re the ones lugging the extra weight but we’re never told enough that we look beautiful and that’s something we really crave whilst pregnant.
Gayle agrees a lovely compliment is always nice too, about the way I look or what I’m wearing as it can be hard to feel like yourself when you are dressing a bump too. 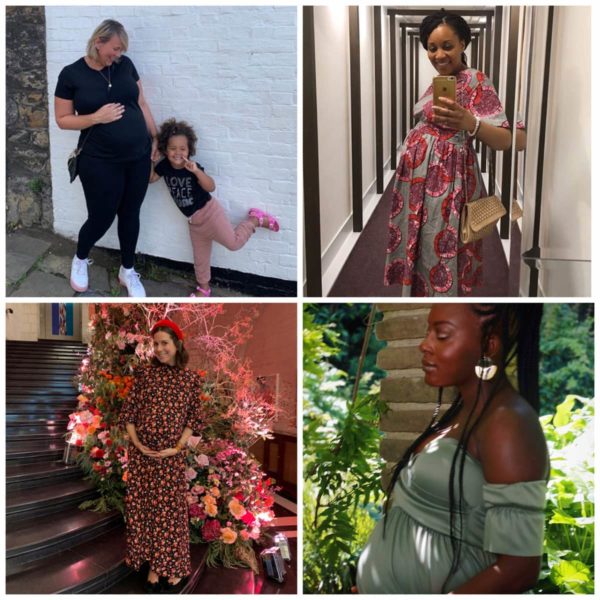 Do Offer Practical Help
Nicola says The best thing to do for a pregnant woman who already has young children is to take the other kids out so she can get some rest. Pregnancy tiredness is like nothing else and when you have another child/other children to care for it feels pretty relentless. Those few hours are so needed and very much appreciated.
Siobhan agrees visit and DO something helpful- bring food / cook food, wash up, hold the baby and facilitate mum having a nap, making tea and so on.

Do Help Without Being Asked
Anna is specific about the help offered Instead of just encouraging her to rest, make it so that she has to! Bring a cooked/frozen meal so she can have an evening off cooking. Make her a cup of tea in her own home. Invite her other children round for a playdate and chuck some chips in the oven. Drop round a care parcel – some chocolate and a facemask. So many times we say ‘let us know if I can do anything to help’, and it isn’t called upon because most people find it hard to ask and fear being a burden. So taking the question out of the equation can be good!
Alice agrees that any support is appreciated ‘when the baby comes, let me take the older kids to school for you’, or ‘I’ve cooked some meals for your freezer.’ The point is, not asking if you can help, but taking the responsibility away from the pregnant mamma and just doing something nice and giving them a supportive fait accompli. That way, there’s no sense of being a burden.

Do Reassure Them – They’re Already a Mother
Sandeep was riddled with anxiety during her first ‘successful’ pregnancy having had two previous miscarriages, both at 12 weeks. At the time I thought that the best thing for anyone to have said or done for me would’ve been to not mention the pregnancy at all and distract me with restful adventure. In retrospect I wish someone other than my husband had told me that I was a mother already & that now was the time to take pause, experience every kick, every flutter. To ignore the pregnancy / parenting “advice” noise and to trust and take confidence from my instincts. A mother’s instincts will never fail her. (Foot rubs also helped).
Annie says Pregnancy, particularly the first one, can feel quite surreal; it can be hard to connect with what’s actually going on inside you. One of the nicest things anyone said when I was pregnant with my daughter, my first baby, was: “Happy Mother’s Day” – on Mother’s Day. It was a man on the street who was walking past and could see I was pregnant. Until then, I hadn’t been called a mother and it was such a lovely moment; an acknowledgment of everything I was already doing for my baby, even if she wasn’t yet out in the world.

So there you go. These women speak with experience that anyone that has been through pregnancy will share. Alice summarises pregnant women are sensitive, hormonal and likely emotional souls: tread carefully.

Above all, just be kind.

Thank you to all the women who contributed. Earlier this week we launched The Pregnancy Care Package which, very much in keeping with this post, is all about encouraging a mum-to-be to take a bit of time for themselves and offers some TLC when they might be feeling like they need it.
Dos and Don’ts image from callminor.com