The First Year of Motherhood

On all the kids’ birthdays I find myself full of reflection, my mind playing a movie reel of moments from their lives so far. But that first birthday is the one that gets me the most. A feeling of ‘we made it’. I made it.

I find the first year to be a stream of contradictions. The longest and yet quickest of years. The epic highs and tear-soaked lows. The exhilaration followed by rage and confusion and back again. I’ve never felt so proud yet so uncertain of myself as in that first year.

I have felt pride in my body, aware of how lucky I am to have gotten out the other side relatively unscathed with three beautiful children to show for it. I’ve simultaneously looked in the mirror and felt despair at what has been left behind. The softness, a marked and misshapen version of my previous body that doesn’t move quite as it should.

I’ve felt aches, a tiredness in my body; a GP check up showing that I am indeed nothing more than tired. I need to nourish my body with good things and show it the kindness it deserves. Having a baby is a monumentally physical thing – from the birth to lugging car seats and prams, hunched over feeding. There should probably be some sort of ‘Couch to Motherhood’ training but instead we allow minimal recovery time and wonder why our bones ache.

I’ve pulled up the drawbridge and taken care of myself far better than with my first two children, revelling in days alone, just me and my baby. Then I’ve craved adult company and a conversation beyond nap schedules, before quickly over-stretching myself. I’ve been out, stood in a group watching mouths move but my head can’t stay in the conversation, distracted by when the next feed is due and wanting nothing more than to be at home again.

I’ve been in a music group, bouncing the baby and winding the bobbin up. Contorting my face to look open and friendly. Surrounded by women going through the exact same thing, and yet feeling completely alone. Bundling my way out at the end for fear of bursting in to tears and not being able to answer ‘what’s wrong?’. Because nothing is wrong, but nothing feels quite right.

I’ve held back tears at a baby weigh in, my babies not following the line paved out for them in their red book. I’ve watched other women burst in to tears in those hot, noisy rooms and wanted to push everyone aside and hold her and tell her she’s doing the best job, not wondering why I’ve struggled to say that to myself.

I’ve wanted to hand the baby over, the combination of responsibility and milk-laden chest making my shoulders heavy. Seconds later I’ve felt a pull at seeing him in someone else’s arms, impatient for them to hand me back my baby, my beautiful boy.

I’ve felt thrown in to domesticity and resented it, while wanting nothing more than to be at home; aggrieved at watching the rest of the world seemingly achieve and accomplish, while stepping more firmly in to the role of mother. I’ve fallen short as a friend, distracted by my own overwhelm. Feeling a distance as they appear to bound ahead with energy while I drag myself forwards but feel like I’ve stopped still.

I’ve felt anger at Doug for not understanding how I feel, while having no idea what I feel myself. We’ve experienced the wonder of creating a life together, exchanging excited looks as our baby does something new, and yet at times it’s pushed us to feel disconnected. Co-existing but not communicating, moving around the house silently, our familiar bodies awkward with each other. 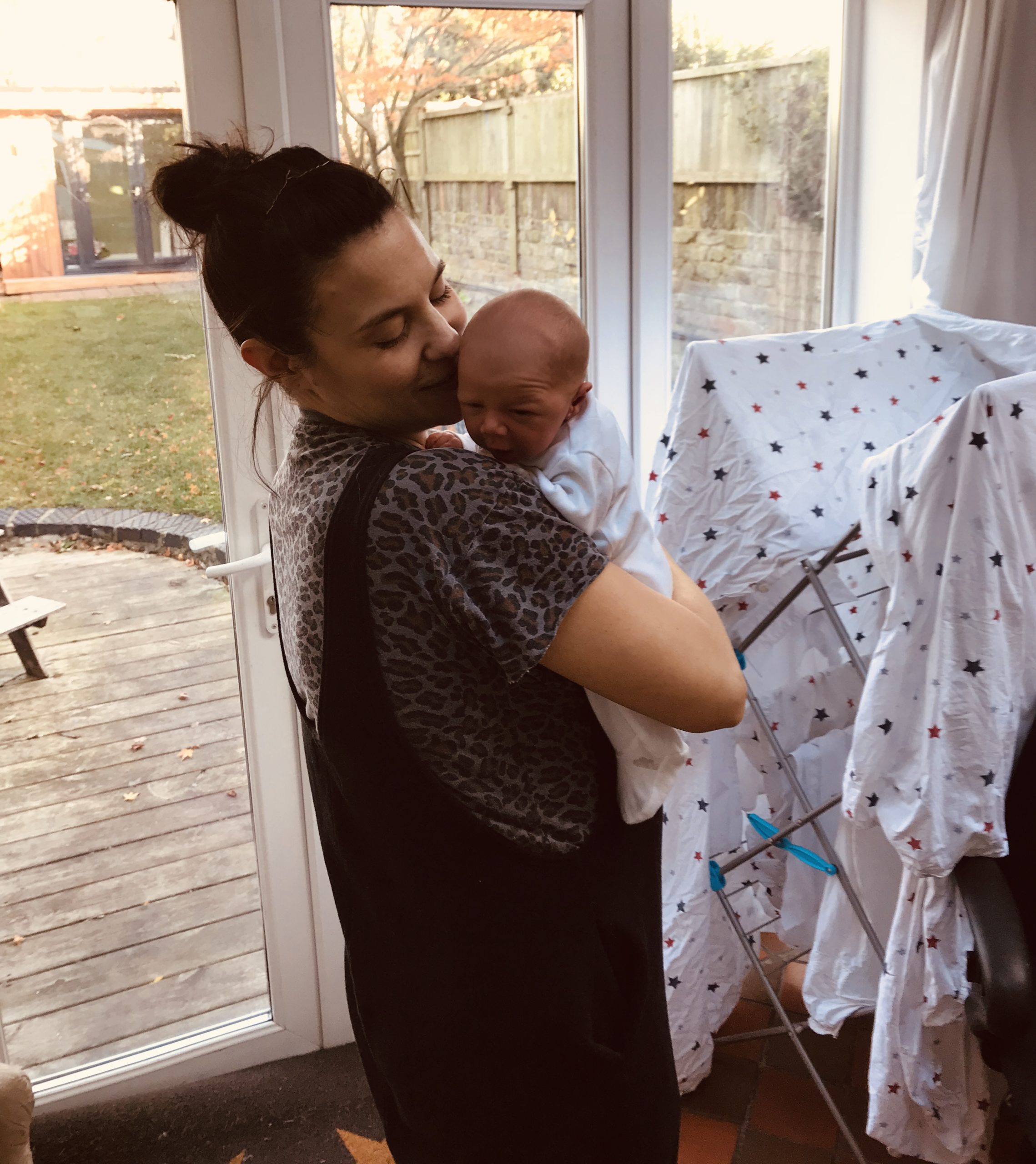 And then it happens – each time it has happened – a rising from the ashes, from the debris of early motherhood. It starts with more glimpses of sunshine and less foggy days. More days where I hear my own laugh and it doesn’t catch me by surprise. I can listen to the radio without frowning at the noise. It’s like a series of heavy curtains raising one by one. The first time they sleep. The first time you feel properly relaxed. When you are able to leave the house and it doesn’t feel like it takes all your brain capacity.

I wonder, is it because we’re supposed to feel like this? Instinct pulling us in to a cocoon that can’t think much beyond the baby, and the world confusing us by pulling us in directions of what we should be feeling, and a need to prove motherhood doesn’t make us ‘less’. A bundle of conflicting emotions and hormones, while reworking relationships and rebuilding our bodies and minds.

And the biggest contradiction of all – I’ve found the beginning of motherhood to be the hardest thing I’ve ever done, but when you strip it all back it’s the simplest. My baby, with his perfect face and insatiable love of banana and one podgy hand always holding a wooden spoon. That love. The sheer, hard, knock you sideways love.

The love that in time makes you look back at this mad exhausting phase in soft focus, remembering it with a heart so full it feels like it might spill out of your mouth.

The first year of motherhood.

Perfect. I’ve shed a little tear whilst feeding my 1 year and 1 week old to sleep. Oh if only she would sleep

Sums everything up so perfectly

What wonderful words, you’ve completed summed up how I’ve been feeling the last year (I started following you a couple of weeks before my little girl was due and you Frank was due a couple of weeks after that). Although we’ve only met once, funnily enough whilst winding that bloody bobbin up, I feel like I’ve been sat next to you on the same rollercoaster all this time! If you ever fancy a cuppa a biccy just shout x

Oh that bobbin! Thank you xx

I’m only 3.5 months into life with my second and I’m massively struggling this time around. Thankyou for writing this, it just made me cry but it’s all so true, I remember with my first. In amongst the struggle to get out of the house and the loss of identity, I need to remember that this shit will pass and embrace all of the firsts and the lovely moments too x x

“I’ve wanted to hand the baby over, the combination of responsibility and milk-laden chest making my shoulders heavy. Seconds later I’ve felt a pull at seeing him in someone else’s arms, impatient for them to hand me back my baby, my beautiful boy.”
4 months in with my second and this one paragraph sums it up entirely.

10 months in, I feel lucky that I haven’t felt the tear jerking lows, but I have the constant feeling that my husband doesn’t understand the change to my life, and whilst his life has altered, that’s all it’s been. I’m hopeful this post might make him understand my outbursts. Beautifully written. x

I spent my first pregnancy terrified of what was to come. I was 18 and realised I had also been raped when I found out I was pregnant. I had no idea what had happened that night!!! I hid the pregnancy from my parents for 7 months. Then spent yrs in a state of numbness with this little soul . My second pregnancy 14yrs later was very different and welcomed which also overwhelmed me. We all have different experiences but there is always light at the end x

Lying here with a 3 month old fighting naps on my chest. Really need a shower, really need a wee, would love a hot cuppa and it’s on 8am! Slowly Learning to let go of everything. This post is 100% (and more) what I needed to read today as the new year approaches and my son will indeed turn ONE! Thanks Steph, massive fan and have used your company many times now as I live overseas and sending nice gifts is hard to find xx

Thank you Steph. This has really resonated with me, my little one is just 8 months old and I’ve felt all those feelings you describe. Going to read it to my husband as think you’ve written what I have been trying to explain for a while. Thanks for making me and others feel like it’s ok to feel these things and to ride out the harder times and celebrate the great times.

this is exactly how i feel!! i got tears rolling down my cheeks when i read this with my 6moth old babyboy crawling around with joy-and me sitting in front of my porridge at 5:15 the sixth day in row, asking myself why he won’t sleep longer, why i just don’t manage to use this early hours to get things done but i feel soooo tired! and than he looks at me with the widest smile and tries to say mummy-which leaves me crying-again! love your insta feed too! note: sry for the mistakes, obviously not a native. i’m from austria

My friend just sent me this post..
Such truthful and heartfelt words… Thank you!

Love this blog post – I can relate to it on so many levels – the push and the pull and the circle conversations (usually with myself!). Thanks for sharing

Thank you Steph. Thank you for capturing this kaleidoscope of emotion. I feel and see a different rainbow or foggy smudge each hour i look through this funny lense. I am currently enthralled by my 11 week old daughter, but simultaneously wretched with tiredness. I know each part is a phase, and that the joy seemingly compounds, having made it to 3 years with my son. Your words have definitely made me feel more a part of the Sisterhood. We need more hugs. Thank you. x

Thank you Steph. Thank you for capturing this kaleidoscope of emotion. I feel and see a different rainbow or foggy smudge each hour i look through this funny lens. I am currently enthralled by my 11 week old daughter, but simultaneously wretched with tiredness. I know each part is a phase, and that the joy seemingly compounds, having made it to 3 years with my son. Your words have definitely made me feel more a part of the Sisterhood. We need more hugs. Thank you. x

Probably the most accurate description of motherhood I have read yet. Thank you for making me, and countless others I’m sure, feel less alone and less hatred for our feelings. Honestly, it made me cry, thank you