Father’s Day can be a challenging time for lots of people. For Lorna Harris @lornamedia this will be her second Father’s Day without her dad, Harry. In her piece for our #whatmakesadad blog series she has written a moving tribute to her dad who once achieved Twitter-fame with a cake he baked for Lorna’s birthday after her mum died just two months before.  We loved reading about Lorna’s dad – not because she says he was perfect, but because of the love we could feel in every word.

This is the second Father’s Day without my dad, Harry.

He died in March 2019, just six months after the sudden death of my mum Glenda. We never thought just months later, our dad would be gone as well. My parents were teenage sweethearts. They met when my mum was 15. By 19, they were married. He saw her for the first time in Woolworths. He said to her ‘I will marry you one day.’ She was in there with her mum, my Nan. ‘He fancies his chances’ said my Nan.‘Just a bit’ said mum.

I loved this story. The last anniversary they spent together, they celebrated 51 years married. Harry was a great dad. A deep thinker, a wonderful provider and a talented artist. At times, he worried about us all to the point of being a bit possessive, but it you cut through him like a stick of rock, it would tell you, this is a good man. Sometimes grumpy, but always good. Mum had been caring for him since his diagnosis of heart failure a few years before, and when she died, I stepped in.

Between us, we muddled along. We became better mates than we ever were. ‘I’m sorry’ he would say as I cared for him. ‘Don’t be’ I would say. He was my dad, my mate. To me, that is what makes a dad. Someone who can also be your mate, an anchor. A soft landing. After mum died, he even had a stint as an internet sensation after he tried to recreate my mum’s signature cake for me on my birthday. 40K likes later, there we were. He loved it. He wrote in his diary ‘I never thought I would be a social media star.’ – It made us laugh so much. 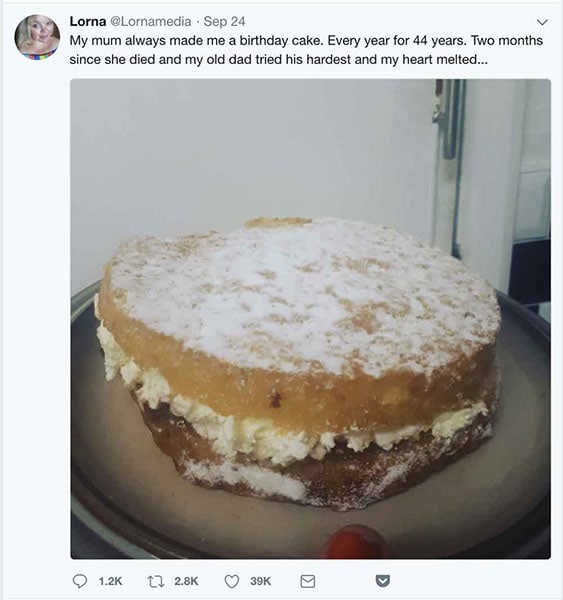 At school, he would write me notes for my lunchbox. They always made me cringe, but now I cherish the memory.

Father’s Day 2006, I gave dad one of those ‘Dear Dad’ books. He had to fill it in and give it back to me. He completed it so beautifully and carried on writing to me in his future diaries. We found them after he died. They were tucked away in his shed.

‘I pray you will get better’ he wrote, when I was very unwell a few years back.
‘I think you should PR gin, he wrote, with a smiley face, you seem to love it’
‘I was so proud of you today. I watched you drive off, and as we waved I said to your mother, ‘I think she gets it from me.’

I’m not sure what makes a dad, but I know what made mine. A man of such pure authenticity, so shy but would push himself in life. He struggled with anxiety, he loved my mum with a passion, loved his children, wore bright clothes, danced, sang loudly in the car, adored his grandchildren, and cherished his dog. I miss his voicemails, where he would just leave the message ‘DAD’.

He loved his life. We wanted him for longer, he wanted us for longer. ‘Please don’t let me die’ he said to the doctor when he was in hospital. ‘My kids have just lost their mum.

’ Still ‘dadding’ when so very ill.

I was with him when he died. Our eyes locked as he passed, he knew, I knew.

I hope the look I gave him as he died said it all. ‘You made us so happy dad, you loved and were loved. You fancied your chances, and boy, it paid off.’

*WIN* £75 worth of credit to spend with Don’t Buy Her Flowers.

Because we know there is no such thing as a ‘typical dad’, we want to hear your stories about your dad or a father-figure and we have three vouchers of £75 to giveaway. Winners will be chosen at random. UK Deliveries only.

To enter the giveaway, what you have to do is:
1. Post to your *own account* on instagram with the #whatmakesadad. It can be light-hearted or serious, an image or a video – the choice is yours.
2. Include the following sentence in your caption ‘I am posting my #whatmakesadad to enter a @dontbuyherflowers giveaway’
(if your account is private just DM us and we will request to follow you so that we can see your entry). Competition closes midnight Monday 15th June. Find out more on our Instagram.