Despite the fact I run a gift business – I’ve made a job out of gifts – I have a confession to make. I am rubbish at buying gifts for men.

For his most recent birthday, I got Doug a garden tidy and some marmalade. It’s possible I was in the garden centre with Mabel picking up grass seed the previous day, and I possibly realised that I hadn’t got anything and had run out of time. The kids whooped and cheered as he opened them and I think he was actually pretty pleased with the garden tidy (who wouldn’t be?), but it did get me thinking – men are often categorised as crap gift-buyers, but is buying for men equally as tricky?

My brother Chas’ birthday happened to coincide with a family camping trip. There was much sniggering (from me) as I handed over a full body suit made of sleeping bag material – a sleeping bag onesie if you will. Apart from at the peak of winter freeze, the user would sweat profusely and going to the loo would be a debacle. In hindsight, it wasn’t even cheap and I imagine it now sits in the attic. As a kid my go-to for Dad was always hankies. I remember going to Woolworths one Father’s Day as they had a monogrammed selection (so fancy) but they didn’t have an ‘S’ for Stephen left, or even a ‘D’ for Dad. They did however have an ‘F’ for Father. I was pretty pleased with myself at my broad thinking.

I put the question out to my friends, who I know are generous and thoughtful when it comes to gifts for each other or for their kids. My friend Hannah once framed an old birthday card with Wallace and Gromit on it for her Gramps’ birthday. It’s a step up for her dad, who gets novelty golf club heads in the shape of tigers or bears.

Of course you can always go down the sentimental route. Which can also double up as ‘low cost’ (never cheap my friends, never cheap). One particularly skint Father’s Day, my friend Lis rinsed out an old Dolmio jar and got the kids to write reasons they love their dad on scraps of paper. It’s a cute idea but she felt the execution let her down; ‘I didn’t even try to make it look pretty’. I love the idea of her standing in the kitchen, laying eyes on a discarded Dolmio jar and thinking ‘Got it’.

Instagram King and father of four Simon Hooper wrote about what he really wants (and doesn’t want) for Father’s day over on Fathers Inc. What is really interesting is that it doesn’t differ wildly from Mother’s Day wish lists. Something thoughtful, some peace and time out, some booze and something made by the kids. This doesn’t count a fimo model he made for daughter Marnie several months earlier and she regifted back (although I’m quietly applauding her for that one).

The idea of dads actually wanting a bit of time out and perhaps to feel looked after is a far cry from a comedy tie and a Worlds Best Dad mug. Yet Worst Father’s Day Gift Lists are awash with novelty aprons, fart gags and gadgets that will quickly be consigned to a drawer.

Why, when it comes to men, do we tend to go down the funny or practical route? Is it because they’re not supposed to be sentimental (being men), in which case we’re guilty of expecting them to have moved on from the 80s in every way, except an expectation that they should still find joy in the gift of a pair of boxers with a superman logo on. Matt Coyne, author of Dummy and very funny chap, says ‘My problem with this day is that it seems to be less a celebration of fatherhood, and more a celebration of manliness. Almost every ‘what to buy dad’ list I’ve ever seen includes a ‘day at the track’ or a cordless pissing screwdriver. It’s a miracle that these lists don’t still include a ‘big norks’ calendar and a VHS video boxset of The Sweeney’. No. 1 on his list is a lie in and a day eating Pringles in his pants. 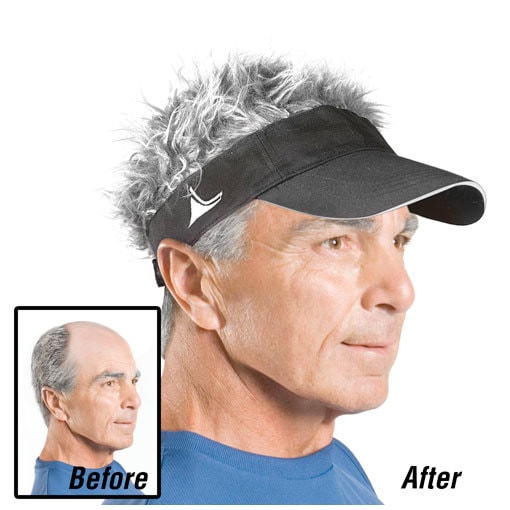 The gift of hair!

If we’re really honest *whispers* are we reluctant to give Dads what they actually want – some time to themselves – because that would involve single-handedly taking on the kids of a weekend without bemoaning it afterwards? In reality since having two kids Doug takes time for himself much less frequently than pre-kids, whereas after emerging from The Baby Zone in the last couple of years, I’ve got better at taking time out for myself and all hell breaks loose if I think he’s not 100% ecstatic for me. If Doug goes in to another room with a beer on the weekend, I’m likely to appear clutching my ‘Weekend To-Do List’ and ask if he’s going to fix something or go to the tip. Perhaps I’m kidding myself that a trip to Homebase counts as ‘alone time’ for him.

In the run up to Mother’s Day we heard cries of ‘I love my kids but for Mother’s Day I would love some time to myself’ (some continued with ‘and some gin’, which we were more than happy to help with!). So, something to think about ahead of Father’s Day. If you are looking for a thoughtful gift we can help, but this blog isn’t about the hard sell. Maybe I’ll think about folding away the to-do list and encouraging Doug to do something that is just for him. Much as I moan about his tendency to leave his pants on the bathroom floor in the exact spot they’ve fallen from his body and not replenish the toilet roll, in the kids’ eyes he’s their wonderfully perfect Dad and that’s what we’re celebrating on Father’s Day.

ENTER OUR COMPETITION We’d love to hear about the most terrible/comedy gift you’ve bought for a man. Go to our Instagram, Twitter or Facebook pages to find out how to join in, and a winner will be chosen at random to receive a Man Package (which you can gift to anyone in the UK in time for Father’s Day). Full entry details and T&Cs.

Matt’s book Dummy is available to buy and would also make an awesome Father’s Day gift – head to his Facebook page and go to ‘shop now’ if you’d like to buy it.

You’re totally right: I can’t think of anything my partner would like more than to be surprised with an evening of hanging out with his mates. But his mates are almost impossible to corral into any kind of plan… Hmm…

Ah now that can be an issue… xx